Today the Scottish Parliament will discuss Scotland’s draft climate plan.  Four committees of MSPs have grilled witnesses, sifted facts and produced hundreds of pages of detailed and insightful analysis of the Scottish Government’s plan to reduce climate emissions by two-thirds by 2030. 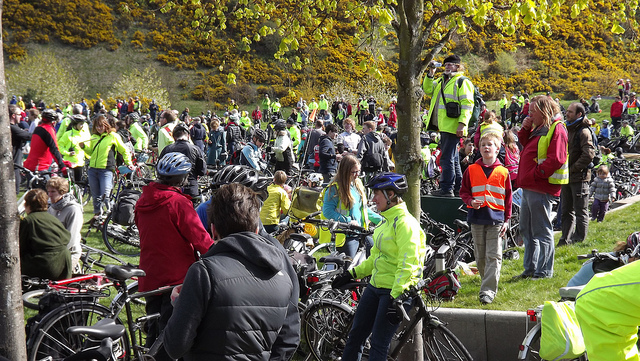 Like us the MSPs find things to welcome but also think there is a lot more work to do to get the plan in shape.  No-where is this more true than in the transport section.  The Transport sector is the largest sector of carbon emissions for Scotland, producing 28% of all emissions in 2014 and has seen no significant reduction in emission since 1990, while overall emissions have fallen by over 45%.

The 2009 Climate Act required Scotland’s emissions to reduce by at least 3% every year from 2020, but the actions in the new plan would see transport emissions falling at less than half that rate.   Perhaps we should welcome the idea that transport will actually do something about emissions, instead of the nothing at all it’s been doing for the last two decades.  But when you look at the details you find that the plan is basically to let traffic grow, mostly ignore walking, cycling and public transport, and hope that technology will save us.

The starting point for the future of transport is Transport Scotland traffic model which says there will be 27% more miles driven in 2035 than today (and no increase in the use of buses).  The predictions of increased distances driven are justified in the plan with this interesting statement:  “As historically, so in future we expect economic and population growth to increase the demand for the movement of goods, services and people.”  Transport Scotland’s view of history is clearly rather odd.  When the government published a 2006 transport strategy it predicted that traffic levels would grow by 22% between 2005 and 2015.  The actual growth in traffic levels was 6%.  The fundamental assumptions used to create the transport numbers fed into the climate plan are clearly nonsense.

Transport Scotland don’t seem to have had the slightest interest in how to head off demand or encourage walking, cycling or public transport.  This is despite the findings of a 2009 report which showed that measures like workplace parking levies, speed limit reductions and increased public parking charges are, for instance, four or five times more cost effective at reducing carbon emissions than investment in electric vehicles.  By helping people to make different transport choices these kind of measures contribute to improved air quality, more active citizens and healthier local economies, as well as reduced climate emissions and congestion.

The biggest reductions in emissions are supposed to come from a tightening of vehicle standards from the European Union.  A Union we are about to leave.  Even where technical fix measures are desirable and necessary the proposals look weak in terms of both delivery and international comparisons.  The Plan envisages that 40% of all new cars sold will be ultra-low emissions by 2032, yet the government’s own climate advisors said we should aim for 65% by 2030.  Meanwhile, Belgium, the Netherlands, Germany and Norway are all discussing or committed to targets of 100% by 2025 or 2030.

On transport the government need to go back to the drawing board, come up some traffic targets that are actually credible, aim higher on electric vehicles, walking and cycling, and stop marginalising buses and trains.

This blog appeared in the National on 16th March 2017.