Yesterday saw the first formal meeting under the Paris Agreement, complete with a red carpet for minister, heads of state and royalty.  There was an overnight rumour from Washington that President-Elect Trump would use this occasion to announce that he would pull the US out of the both last year’s Agreement and the overarching climate convention from 1992.  Conversely, yesterday UN chief Ban Ki-moon said he was sure Trump would see sense.  At the time of writing there were no new developments either way … 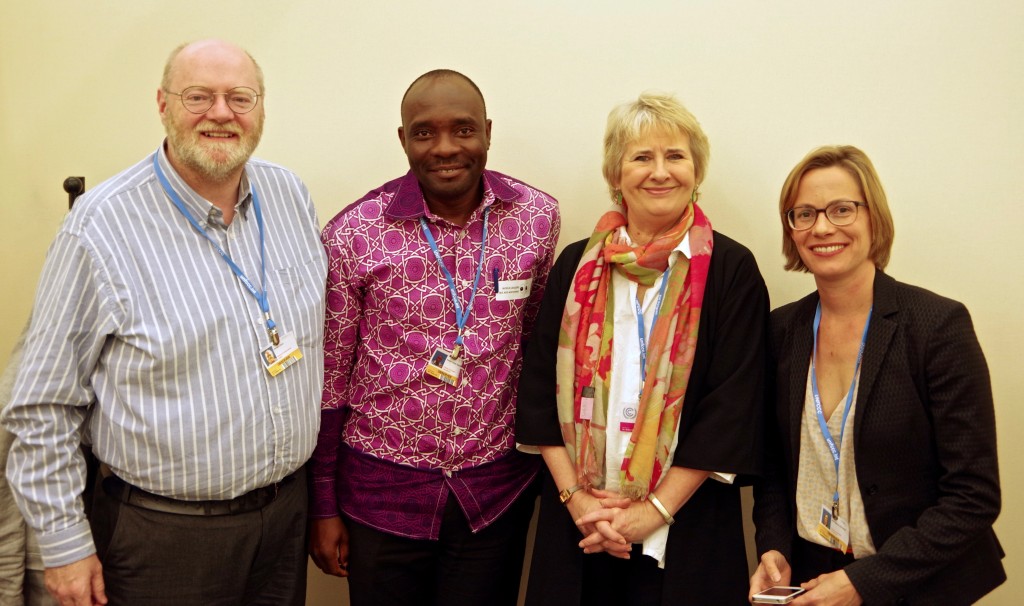 I met our Climate Secretary, Roseanna Cunningham, with Ann Kathrin from FoE Germany and Kwami from FoE Togo.  We discussed African responses to climate change, like the developing Renewable Energy Initiative.  We also talked about the new climate plan Germany has just published, and what the two countries can learn from each other about increasing action to reduce emissions while also bringing the public along with them.  The Cabinet Secretary had spent some of yesterday speaking at an event for states and regions who are leading the fight to reduce emissions.  She spoke to US representatives and took heart from their strong determination to keep doing what they are doing, whatever Mr Trump does.

Meanwhile, what has actually happened in the climate talks ?  As you might expect in negotiating international treaties, countries and groups are always looking for advantage, with several attempts to re-interpret important bits of the Paris Agreement or over-egg moderate progress.

There is supposed to be $100bn a year from 2020 of climate finance – to help poorer countries adapt to the terrible impacts of climate change and to develop their economies in low-carbon ways. The UK and Australia published a report as an OECD study but it tries to include existing overseas development aid and loans as climate finance. The report claims that rich countries have already delivered $62 billion, but the UN’s own analysis said the correct figure is only $25.6 billion of new money and an analysis by Oxfam showed that if you account for the loans properly then the total contributed so far only adds up to around $16 billion.  So richer countries are trying to use accounting tricks to pretend that the climate funding is approaching full when the truth is that the coffers are still almost empty.

Without much more effort to reduce emissions immediately we know the world cannot meet the Paris goals on temperature increase.  With no country is on track to delivering a fair share of the effort needed to meet the Paris Agreement goals on limiting temperature rises, there is an urgent need for rich countries to increase their planned action up to 2020. We need an end to fossil fuels as quickly as possible and an acceleration of the renewable energy revolution that is already underway. Sadly Scotland is that rare exception – a country which is promising to increase its ambition in the next few years.

Ministers will talk about pre-2020 action and finance today but most people are sceptical that much new action or money will emerge yet.

This blog appeared in the National on 16th November 2016.