Today’s papers make much of INEOS’s claim that fracking could bring £2.5bn of benefit to communities in Scotland. This is despite (a) INEOS having already said this last year (here) and (b) this number being as dodgy as a three-week-old tuna sandwich. 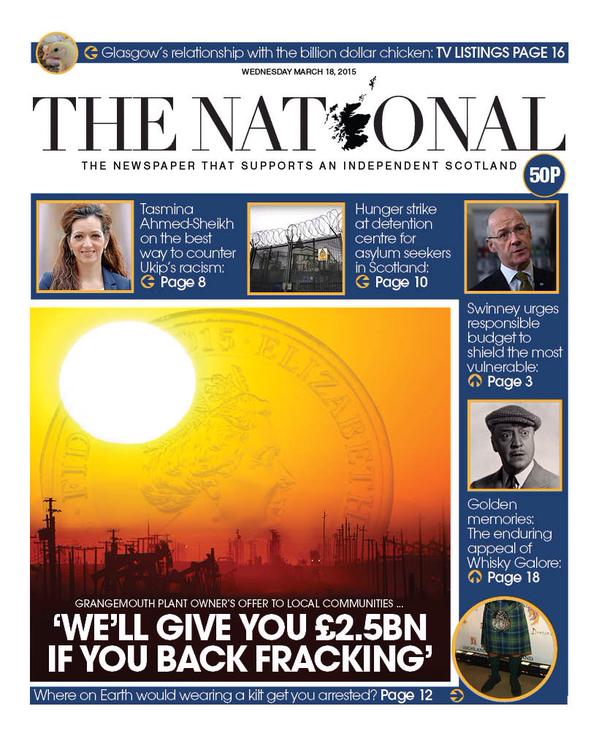 I suppose if you were a journalist who went all the way to Grangemouth just to be told the company were going to have some community meetings and show some videos, you might be desperate find something actually interesting to write about, even if it is recycled news.

This £2.5bn is based on 6% of revenues going to land owners (4%) and the wider community (2%). It is also based on the economics of shale gas in Scotland being the same as those in the US – an utterly ridiculous assumption. The US industry is already in running into trouble for seriously over-hyping the benefits of shale gas. A picture is emerging there of a short-term boom made possible by simple geology, rubbish regulation and high oil prices, that begins to fade as production levels off and companies go bust.

There are some estimates for how much shale gas there is under the Central Belt – not very much (here). But, unlike the States, the British Geological Survey say that as little as 1% of this might be commercially recoverable. Their Director of Energy and Marine Geoscience recently said there was “a long way to go before we know whether there is any significant commercial production possible” and fracking company Cuadrilla have also said that it will take 5 years and 40 test wells to work out if it is even worth starting a commercial industry in the UK.

So £2.5bn, properly translated from the US to the Scottish context, starts to look like a very much smaller figure, if there is anything at all.

Last week INEOS admitted that they will not be signing up to a voluntary UK Government scheme to make payments of £100,000 for every test well and £20,000 for every horizontal drilling to communities in area where they do test drilling. (The Telegraph). So you could be living with extensive drilling and fracking, be left with abandoned wells in perpertuity, but not get a penny out of INEOS.

INEOS’s number reveal something else rather interesting – something they probably don’t want you to think about. They claim that an average ‘INEOS shale gas community’ (sounds nice doesn’t it ?) will have 200 wells and get £375m. So the £2.5bn claim is therefore made up of 7 shale gas communities. So at 200 wells a community, that’s a massive 1,400 wells across the Central Belt. This is not a number INEOS have been shouting about.

INEOS have invited Community Councils to a briefing event tomorrow. No doubt local people will remind the company of their boss’ promise last year that they wouldn’t frack anywhere where the community didn’t want them. No doubt the £2.5bn will be dangled in front of communities but the truth is they’ll get somewhere between almost nothing and nothing at all, should INEOS ever be allowed to drill any of the 1,400 wells they want.

The moratorium on fracking and unconventional gas is great news and we will work hard to turn it into a permanent ban. However, the Scottish Government has failed to include the dangerous technology of underground coal gasification in this moratorium.

There are proposals to set fire to coal seams under the Firth of Forth and the Solway which will pose a serious threat to local health and environment.