The Scottish Government has been markedly less enthusiastic about the development of unconventional gas and fracking than its UK counterpart. However, circumstances are conspiring to ensure that in the next few months, the SNP will have to finally come off the fence and either decisively stop this industry north of the border or admit that they are happy to let big companies like INEOS drill and frack significant parts of Scotland. 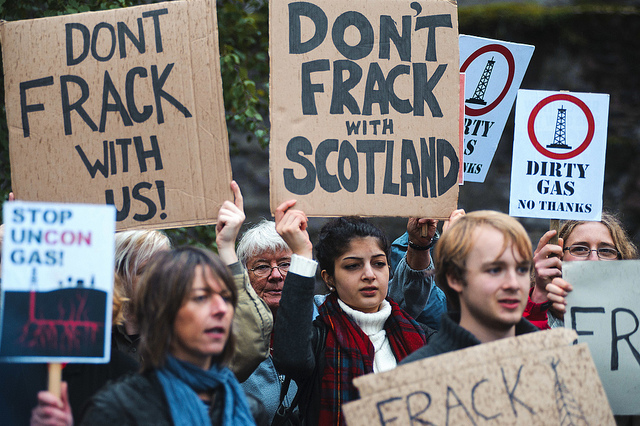 While the UK Government has shamelessly courted this dangerous industry with promises of an easy ride through planning and tax breaks, the Scottish Government has been more cautious. It has put in place tough new planning rules and objected to plans for Westminster to take away the right of people to say no to fracking under their homes. They also convened an expert group, leading to new work looking into health impacts and gaps in environmental protection around unconventional gas production.

That’s all well and good, but unlike Ireland, the Netherlands, France and many others, including most-recently New York State, they haven’t actually acted to stop unconventional gas extraction, despite having the powers to do so. This may come as a surprise to the SNP’s 60,000+ new members, many of whom were left with the impression from the Referendum campaign that the SNP was outright opposed to shale gas fracking (and other forms of unconventional gas extraction such as coalbed methane drilling and underground coal gasification) and doing everything within its power to stop it.

It is hard to over-state how quickly the issue of fracking and unconventional gas has galloped up the political and popular agenda since it gained a high profile during the Referendum debate. In communities across Scotland groups are coming together to oppose unconventional gas. People’s concerns range from local health impacts and the risk to house prices to the climate change consequences of producing yet more fossil fuels. In crowded community centres around the country, people are asking why the SNP have not already stopped this dirty industry.

So far the SNP has talked a good game, but big plans from INEOS to frack across the Central Belt and proposals for the nightmarish reality that is underground coal gasification under the Forth mean that Ministers need to act soon, before the planning applications start piling up and the industry becomes unstoppable.

The only current application – for coalbed methane extraction at Airth – raised thousands of objections, went through a public inquiry and is about to land on Ministers’ desks for a final yes or no in the coming weeks. So that’s a key test of what the SNP really think.

But even if they turn this one down, many other communities would be left facing the prospect of similar long and difficult fights against big companies. The only permanent solution is to ban this industry.

In a few weeks’ time, Westminster will get to vote on the UK Infrastructure Bill. SNP MPs have been good at opposing proposals to drill under people’s homes without asking permission, but this time there will undoubtedly be an amendment that goes much further, proposing a moratorium or ban on fracking. Whether our SNP MPs vote for it or abstain will be another key test of how far the party are really prepared to go. It would surprise many if they abstain, while a vote for a moratorium at the UK level leads to the logical conclusion that the SNP would put one in place in Scotland had they the power to do so.

It is clear that the Scottish Government does have sufficient powers to stop all forms of unconventional gas in Scotland using current planning and environmental powers. All that is lacking so far is the political will to exercise them.

The Smith Commission has proposed that Scotland should control the licensing of onshore oil and gas.  It looks like this may happen this spring, through amendments to the UK Infrastructure Bill. Meanwhile the UK Government is poised to announce the results of last year’s licensing round – new licences across the UK, including potentially tens of thousands of hectares in some of the most populated parts of our country. So either Scotland will get these new powers after all the important decisions about who gets to frack where have been made, or the SNP will be handed the files and the power to decide whether there will be any new licences in Scotland. Either way this is another key challenge for the SNP.

All this pressure, at the local level, over the imminent planning decision, the new licenses and around the UK Infrastructure Bill, comes of course in the context of the General Election. UK Labour have just announced proposals to protect sensitive areas of England and Wales from fracking. Even though this doesn’t go far enough, it is a challenge to the SNP, who need to be seen to be strong on this issue. On climate grounds alone it would be crazy to go after unconventional gas, but there are several other excellent justifications for declaring a moratorium or ban right now – the forthcoming work on health impacts, the acknowledged gaps in the laws which are supposed to regulate the industry and the UK proposals to take away community rights to object. The SNP need to live up to their own rhetoric, deliver on their new party members’ expectations and stop unconventional gas in Scotland before it is too late.