After 15 hours over two and half days of Dart’s witnesses we finally got to hear from a witness from the objectors, Emeritus Prof David Smythe from Glasgow University. 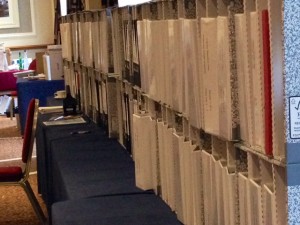 He covered errors in which way faults ran and where the faults are, with a rather important difference of 40m in where the coal really is.  His conclusion on Dart’s geological analysis was that if it was an undergraduate project he would have to throw it out.

Dart’s QC tried to suggest that as a former bass player for the punk band the Rezillos and because he had criticised the UK Government over nuclear waste dump plans he must be anti-establishment.  Prof Smythe’s rather good comeback was that, as a middle-class, white, male, retired professor, he was pretty much the definition of establishment.

Back to another Dart geology witness, then some movement from Dart on monitoring of naturally occuring radioactivity which would be released by the coalbed methane process.

There are a mind-boggling, forest-felling 1000+ documents relating to the Inquiry.  The Dart legal team are in a corner and have folders and files stacked on three sides around them, creating a physical barrier between them and the team from Falkirk Council.

Best quote of the day – “that’s a gross oversimplification of the stratigraphy of the Carboniferous.”