Today was a slow day of carefully and thoroughly picking over lots of details about geology and hydrology from Dart’s witnesses, who had a pretty painful time.  So slow that the timetable is already slipping and we will likely need to re-negotiate with our own witnesses about when they might now be needed. 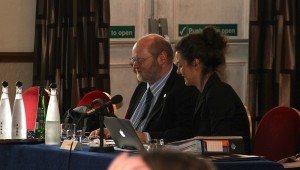 One of Dart’s witnesses on geology started by completely refuting the submission from the opposition witness Prof David Smythe.  Over the course of some hours of cross-examination he came round to the view that there were opposed professional opinions, both of them backed up by evidence.  There was a further argument about whether drilling and geological lines were wrong in the key maps.  Dart’s witness eventually concluded that geologists often disagree and we’ll find out when we drill.  Not very comforting.

There was argument about whether the discharge into the Firth of Forth would be more or less salty than the water in the Forth into which it is being dumped.  Different Dart document seem to say different things.

Falkirk Council’s lawyer carried out detailed examination of water and geology issues, in preparation for their witness on the topics, who we will probably get to tomorrow.  There was a fascinating backwards and forward for 20 minutes on whether a witness did or did not help write a particular document.  A key issue that has come out repeatedly is that much of the data Dart have used to put together their application are either secret or very costly to obtain, so those opposing the development have to work with half the picture.

The phrase “is it not the case that…” was used frequently today.

Yesterday’s planning debate in Parliament saw Labour and the Greens, and at least one SNP MSP supporting 2km buffer zones around unconventional gas developments in Scotland.  The Planning Minister was in no hurry to confirm 2km but it looks certain that the Scottish Government will name a figure in the final version of the new planning policy in June.  This is a great step forward in protecting communities but of course, for the sake of the climate, we’re hoping there won’t be any developments at all.