Last week brought the good news that Scotland had met its latest climate target, with real emissions of greenhouse gases 3% lower than the year before. This is great progress and shows that we are firmly on track to meet our 2020 climate target of reducing emissions by 42% from 1990 levels. 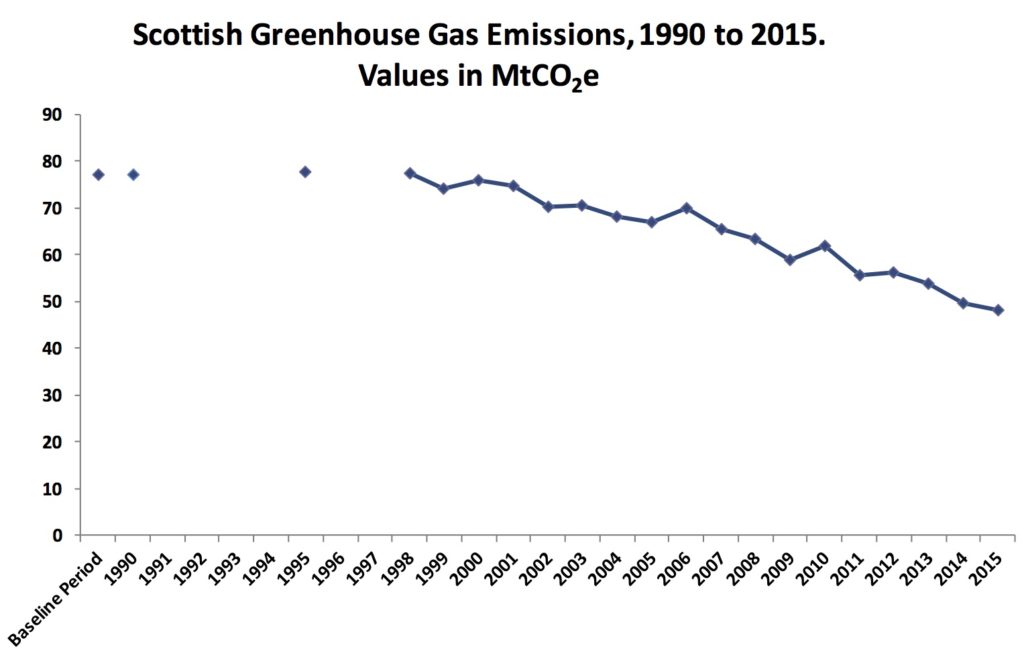 This target and the target of 80% emissions reduction by 2050, were agreed unanimously by the Scottish Parliament as the right figures to ensure Scotland made a proper contribution to the fight to keep global temperature rise below 2 degrees centigrade.

Crucially, in 2009 no-one knew how we would reach that 42% target, and the first action plan listed policies that would just about get us there – but only if there was a very significant tightening of European rules on power stations and factories.  Those changes never happened, yet here we are on track to meet or even beat the 2020 target because of the success of Scotland’s renewable energy sector as well as improvements in home insulation and how we deal with waste.

This is an important lesson to take into setting new targets, as we are promised in a new climate bill due soon.

The First Minster has spoken strongly several times about Scotland making its contribution to meeting the targets in the UN Paris Agreement.  That means aiming for well below 2 degrees of warming and making efforts towards 1.5 degrees to protect the most vulnerable people in low-lying nations and island states.

The world is already at 1 degree of warming, and international pledges under the Paris Agreement would have taken us to at least a catastrophic 3.5 degrees even before Donald Trump started ripping up US climate policy.  So the world is sorely in need of good examples.

In announcing the latest climate results the Cabinet Secretary also announced the Scottish Government plans to aim for a 90% emissions reduction by 2050.  This is an improvement from the current 80% goal but we and the Stop Climate Chaos coalition want Scotland to aim higher, with an end to all climate emissions by 2050.  This would be an iconic signal of intent and 2050 is clearly so far away that tough targets will be met by technologies and techniques we haven’t even thought of yet.

Just as important as the mid-century target, the new target for 2030 will be the one that will drive action to reduce emissions in the important next decade. Scotland already has a draft climate change plan with actions set out to 2032 but it is predictably disappointing on transport, agriculture and forestry.

The Scottish Government asked their official advisors what Scotland should do to help deliver the Paris Agreement. Crucially the UK Committee on Climate Change didn’t answer this question, they just came back with what they thought we can do, not what climate science says we absolutely need to do. And their verdict?  Do nothing extra at all up to 2030 and then try a bit harder after that.

Quite clearly, doing nothing extra for the next 13 years isn’t being more ambitious nor making any kind of effort towards the Paris Agreement goals. It will be desperately disappointing if that’s all the Scottish Government offers when it starts consulting on the climate bill, and they will face a big fight.

To deliver on the SNP’s promises, and to be the kind of good example we were when we agreed the 2009 Climate Act, we need to be aiming higher. That means an end to all climate emissions by 2050, and 2030 and 2040 targets that drive strong action consistent with well below 2 degrees warming as a very minimum.

Tougher targets are good for us.  They mean warmer, healthier homes, better transport options, less air pollution and greener agriculture.  Let’s have those rewards and do our bit for the global fight on climate at the same time.

This blog was published in the Scotsman on 20th June 2017.